At the launch of Chuck Close: Paintings, 1967 to the Present at the New York Public Library in December 2012, Close announced that his latest painting at the time, Cindy (2012), would be the last of its style. And indeed, his three newest paintings since then, artwork records for which have been added to the catalogue raisonné, reflect a shift.

When Cindy Sherman posed for the photograph on which the 2012 Cindy is based, she wore a busily patterned scarf. Close painted Cindy on a diagonal grid, with the canvas fractured into his trademark blocks of brightly colored abstract shapes that critics have compared to bits of Murano glass. 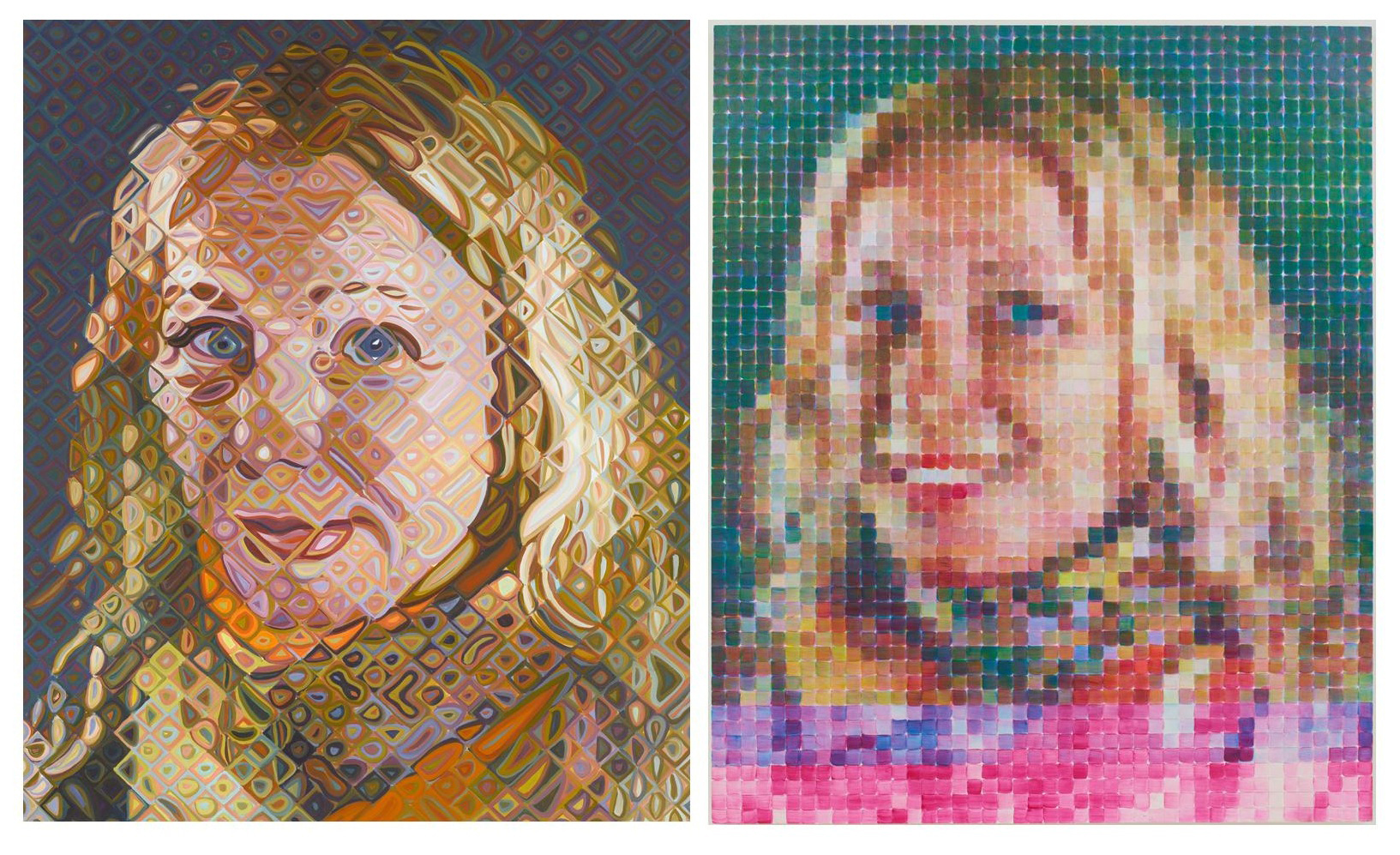 The 2013 paintings—Cecily, Cindy, and Cindy II—retain the grid format, but the cell blocks comprising layers of abstract shapes have been replaced by layers of monochromatic 'washes' of oil, thinly applied to approximate the lighter effect of watercolor. Much has been written about how the individual cells within each of Close’s paintings from the early 1990s until 2012 stand as small abstract paintings that collectively form a figurative portrait. Close has drawn an analogy to musical composition, with the orchestration of visual chords from colors “played together” capturing varying chromatic registers within the larger whole. In the pre-2013 paintings, these visual chords reveal discernible shapes and forms—lines, squares, circles, ovals, and triangles that call to mind donuts, lozenges, jelly beans, bottles, boomerangs, crosses, and amoeboid blobs.

The chromatic chords in the 2013 paintings have completely shed these shapes. Still viable as small abstract paintings, from afar they look like rounded tiles in gemstone colors. The 2013 version of Sherman’s riotously patterned scarf is rendered in pulsating orbs of jewel tones. Viewed up close, the brushstrokes are visible as are the overlaid swatches of yellows, cyans, and magentas. A first pass of amber might glint beneath a unit that ultimately registers as mauve. 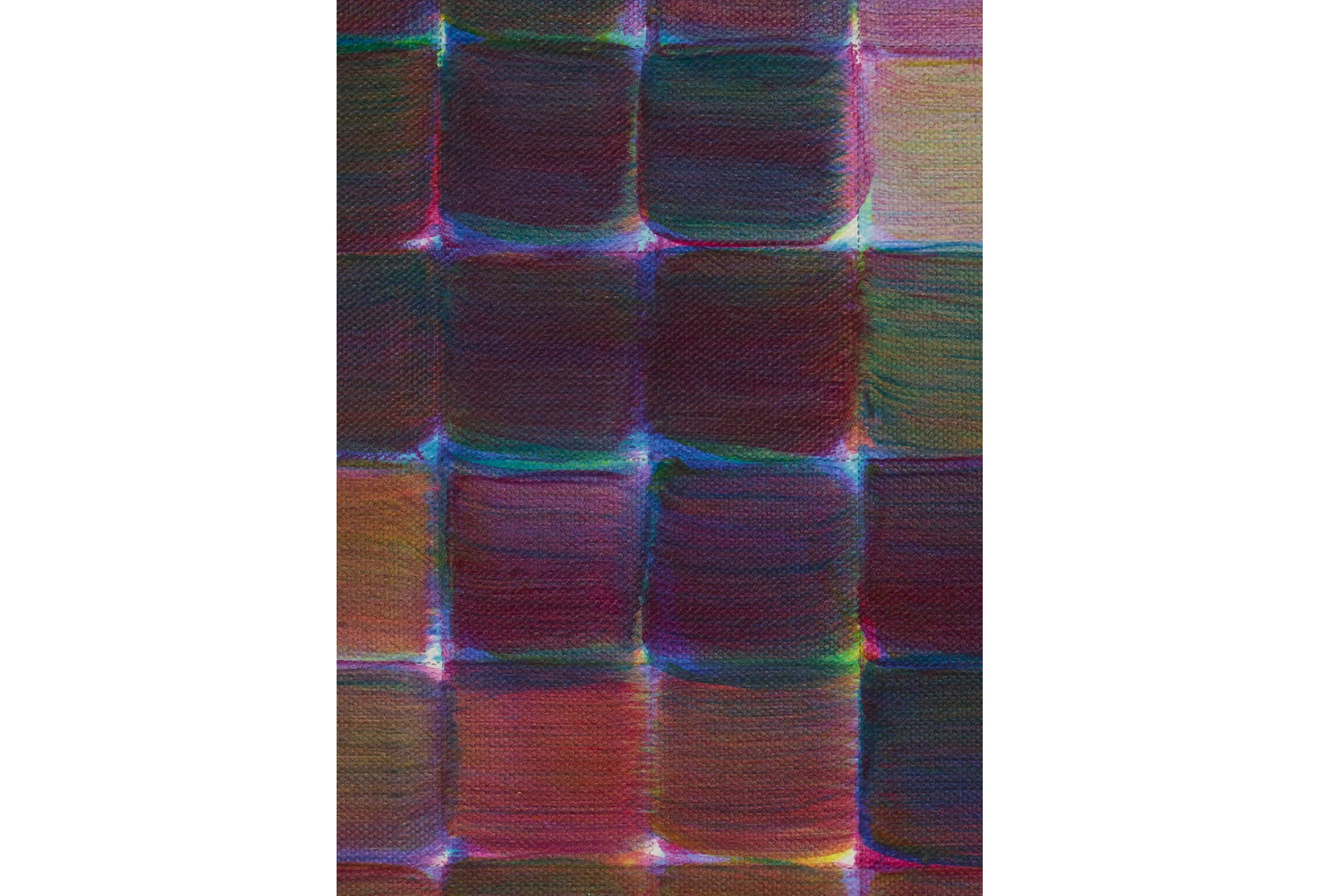 Close has always claimed that the activity of work is the wellspring of ideas. The process in one medium might inform that of another, thereby triggering innovations across his entire practice. The transition between the 2012 Cindy and the 2013 Cindy was made possible by his experimentation with archival watercolor pigment prints in 2012. These were created by overlaying specific swatches of color selected from hundreds of small watercolor strokes that Close made to produce tiles of the full color chart and grayscale. In a way, these new paintings are a hybrid of his incremental grids in oil and his earlier continuous-tone paintings, in which colors were mixed right on the canvas. 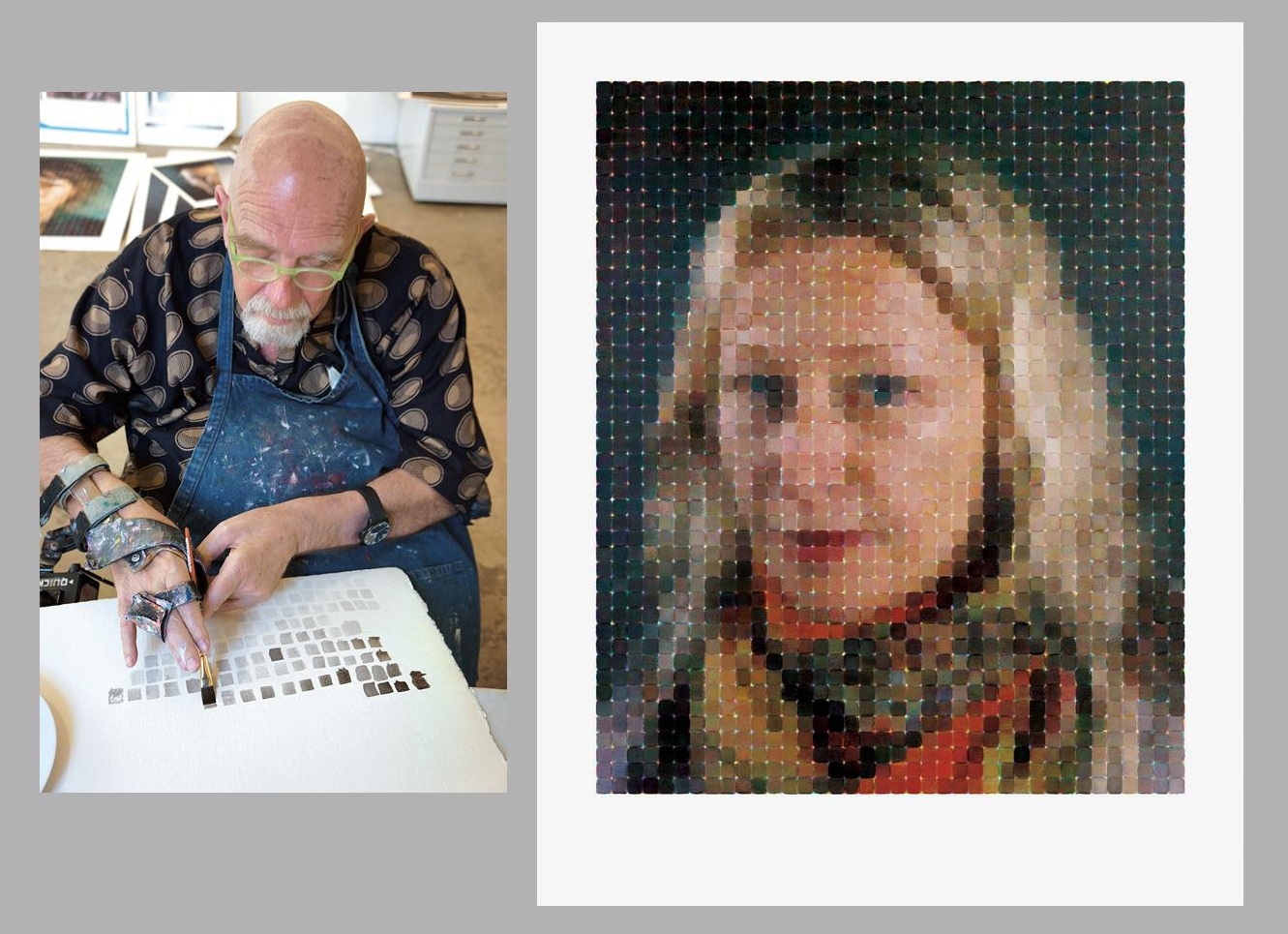 As a child, Close wanted to be a magician or an artist. He sees paintings, prints, and drawings as magical things because their material reality–colored dirt on a piece of cloth, ink on paper–is transcended. The 2013 paintings illustrate his predilection, à la Penn and Teller, for creating magic while also showing the trick. These paintings are deliberately unfinished at the bottom to reveal the process by which the chromatic chords are achieved. Cecily (2013) in particular shows the gradation of finish from bottom to top.

But with Close, every transition is also a recycling. The 2012 watercolor pigment prints inspired his shift in 2013, but his newest paintings are also anticipated by 35 years with the 1978 drawing, Mark/Watercolor/Unfinished. 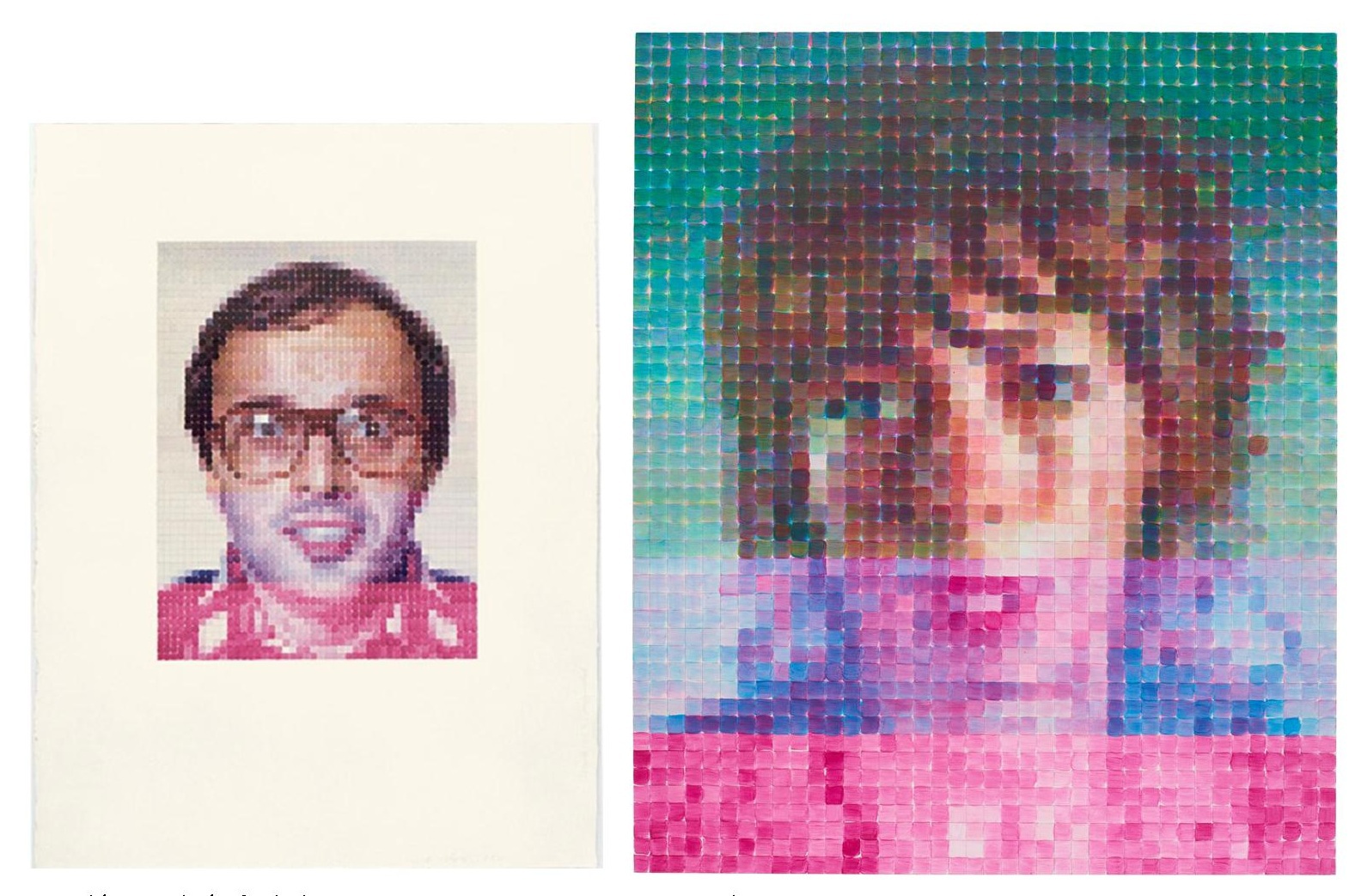 Please note that the newly published artwork pages for the 2013 paintings will be continually updated as our research for provenance, exhibition, and literature histories progresses.

Close’s solo exhibition history has been published in the catalogue. Select exhibition entries link to their respective exhibition pages, featuring paintings that appeared in those exhibitions.

Chuck Close and Freedom of Speech, 1967

For an artist most known for straightforward portraiture—a rather benign art form—Close has not been immune to, or apolitical about, censorship. In 1991, on the heels of the public trial against works such as Robert Mapplethorpe’s homoerotic photography and Andres Serrano’s 1987 Piss Christ, Close testified at a Congressional hearing against stronger anti-obscenity restrictions. But his stance on artistic freedom of speech dates back to 1967, when his first solo exhibition at the University of Massachusetts drew enough controversy that it was immediately taken off the walls without his knowledge. A link to the transcript of the court case that came out of this dispute, “Charles Close v. University of Massachusetts,” has been published. It is cited regularly as the first legal action asserting the extension of freedom of speech to the visual arts.

This section is expanded with the assistance of Artifex Press Archivist/Digital Resource Manager Ashley Levine and Research Assistant Ariela Alberts as more material is acquired. Recently added videos include a recording of the full performance of C to C (Close to Chuck), restaged by the Boston Ballet in February 2014. The ballet, which originally premiered at the American Ballet Theatre in New York in 2007, was choreographed by Jorma Elo to the musical portrait of Close composed in 2004 by Philip Glass. Close’s 1969 painting of Glass has become one of the artist’s iconic works.