Working on the skylight, Robert Irwin second from left

In 1970, Robert Irwin was an accomplished painter who had exhibited his works in numerous galleries and museums. He could have continued on that path. Instead, he decided to shut down his studio, dispose of the tools he had used so far, and steer his work in an entirely new direction by abandoning the creation of discrete objects in favor of responding to the given space or situation he’d been invited to.

It was at this moment that Irwin engaged in wide-raging discussions with Edward Wortz, a research scientist at the Garrett Corporation, during the Art and Technology program organized by the Los Angeles County Museum of Art. Wortz was preparing an upcoming NASA symposium for the organization to study the issue of habitability and to better understand the conditions that lead to human well-being, particularly in view of manned space voyage. Wortz invited Irwin to collaborate on this program by creating a fitting environment for the three-day symposium.

Irwin’s plan was to expose the symposium participants—scientists from different backgrounds—to environments akin to those they might encounter during space travel. He selected his studio at 72 Market Street in Venice, California, as the symposium venue and meticulously prepared each detail of the three-day event, from the moment participants arrived, to the seating arrangements, to light and sound conditions, and even their lunch breaks. 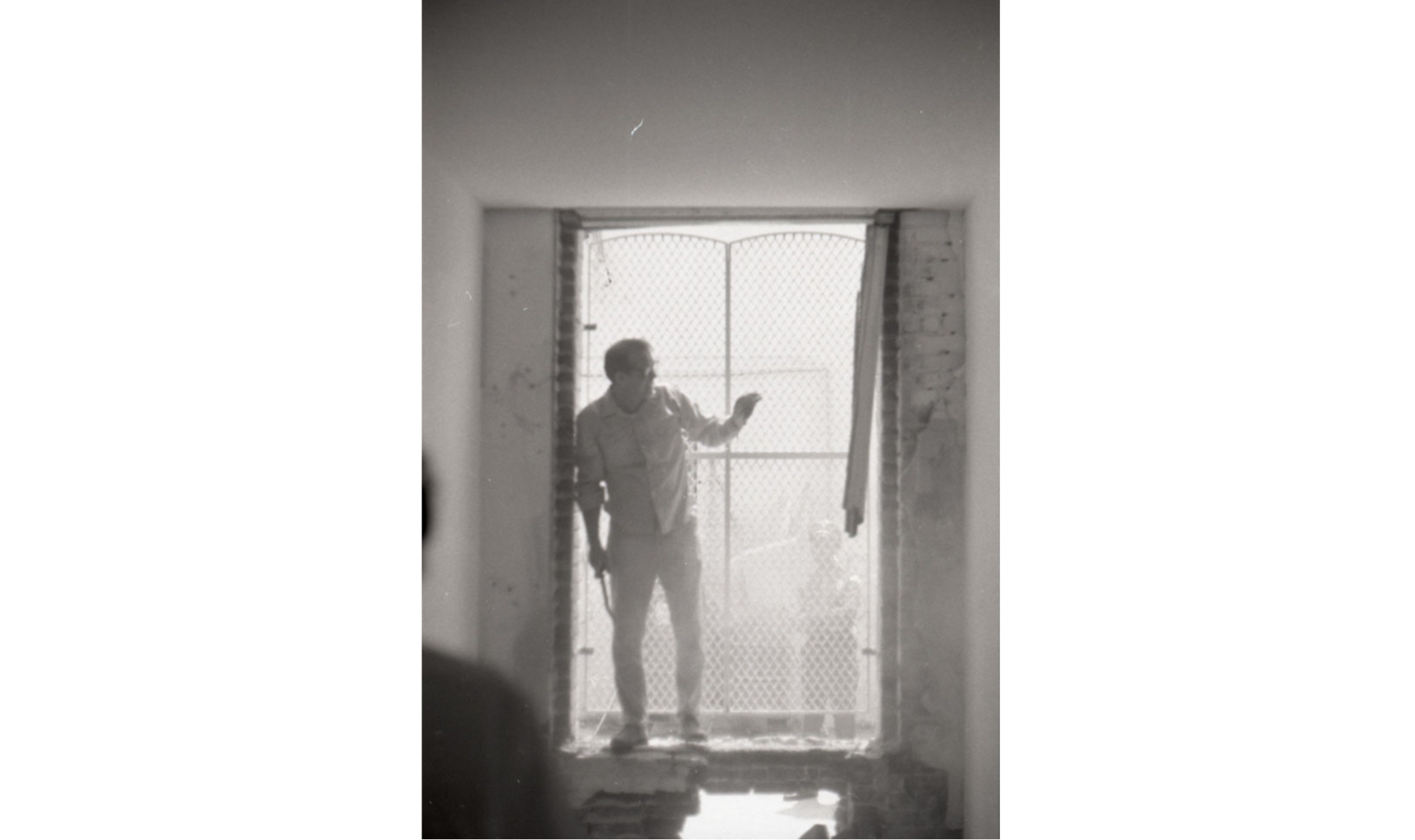 Breaking out the window to enlarge it to a door

Irwin had the participants enter from the dusty back alley behind his studio, climbing past the rubble of an opening he had specifically broken out of the wall. Inside, they found a clean, simple set up, with an elevated central island with chairs for the speakers and loose cushions on the ground for the audience. Irwin blocked the large unglazed storefront window to keep out light and sound so that skylights with special color coating (by Larry Bell) were the room’s only light source.

Left: Irwin cleaning glass panels color-coated by Larry Bell to be inserted under the skylights; Right: Irwin and unidentified person inside the studio set up for the symposium with sonotubes covering storefront window

When the participants returned for day two, however, they found the studio changed. Now the large window opening was covered by a light translucent material, which brightened the interior and permitted a vague sense of the movements and sounds of the street.

On day three, there was another change. Irwin removed any covering from the window opening, erasing all barriers between indoors and outdoors.

In this atypical setting, the participants gradually behaved more casually than they might have in a more conventional environment. Initially irritated or disturbed, they soon realized that the situations in which they found themselves reflected the very conditions they were discussing; instead of approaching those themes abstractly, here they felt the actual impact for themselves.

For Irwin, the symposium marked a turning point in his work, because it highlighted how an individual aesthetic experience was not just an art question but also an environmental and social concern. Irwin carried such concerns with him as he turned away from a studio-based practice and embraced new ways to activate the aesthetic potential of the built environment. With his first consignment from the Museum of Modern Art later that year, he shifted such environmental investigations from the interior spaces of his studio to that of galleries and museums, and in this way the next major phase of his career was born.
All artwork © Robert Irwin/Artist Rights Society (ARS), New York. Photos by Larry Bell