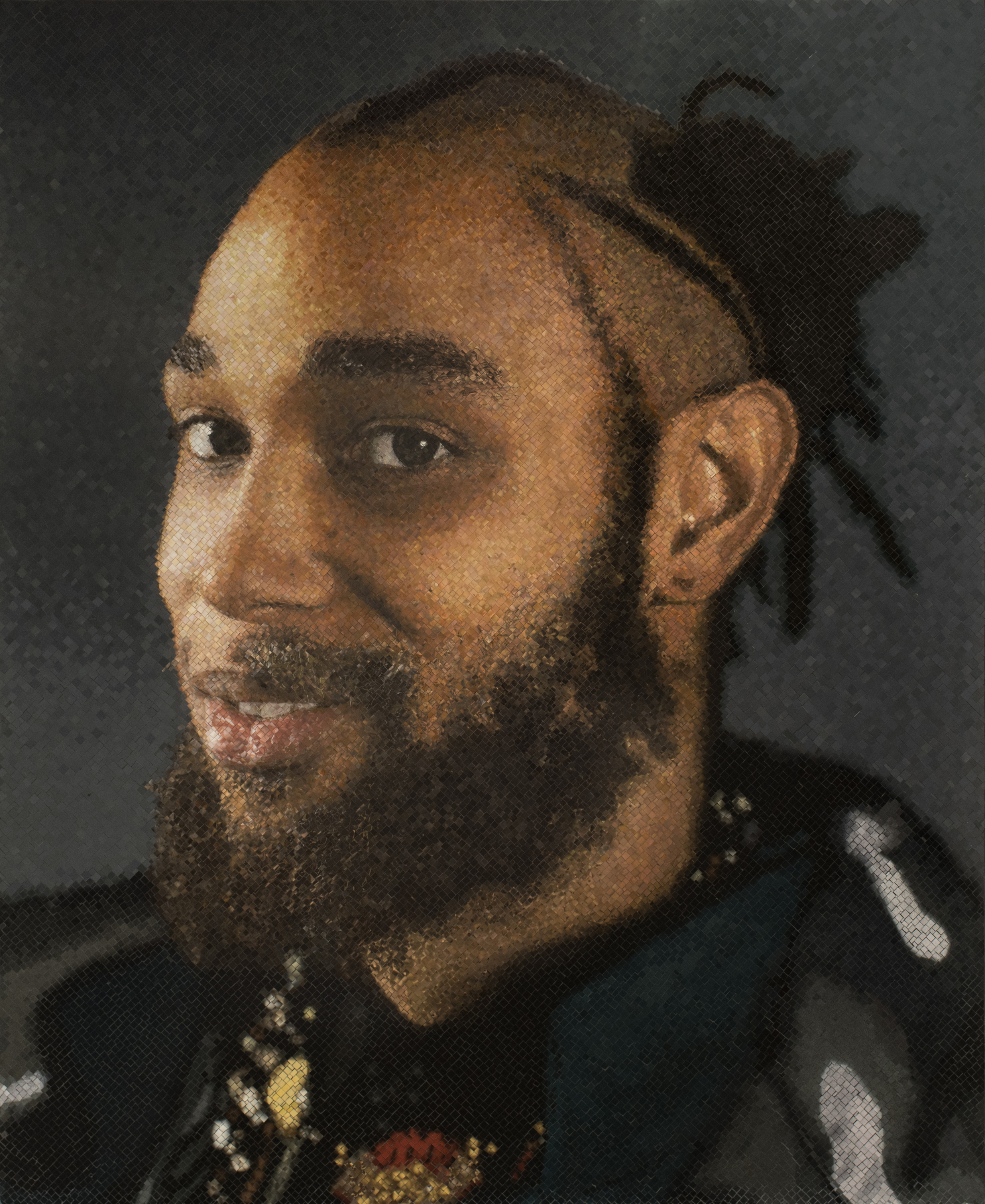 Artifex Press is pleased to announce the publication of "Subway Portraits," a new chapter in the Chuck Close Catalogue Raisonné. Featuring 12 large-scale mosaic portraits commissioned by New York State Metropolitan Transportation Authority Arts and Design, the mosaics are installed in the Second Avenue-86th Street Subway Station, which opened on January 1, 2017. Chuck Close, Vik Muniz, Jean Shin, and Sarah Sze were the artists selected to produce mosaics for the stations on the Second Avenue subway line that had been long awaited since the approval of its initial proposal in 1929.

Although Close began experimenting with creating portraits in mosaic nearly two decades ago, none had proved satisfactory to the artist until he thoroughly explored the possibilities of the medium for the subway portraits with two fabricators: Magnolia Editions in Oakland, California, and Mosaika Art and Design in Montreal. The portraits are mosaic translations from paintings, prints, and photographs of Close's subjects—artists, friends, family, and self-portraits. Although some of the artists featured might be internationally iconic such as Philip Glass, Lou Reed, and Cindy Sherman, his selection of subjects was meant less to reflect celebrity than to reflect the diversity of the ridership of the trains.

Close has referred to himself as “an inventor of means.” The series of mosaic portraits is virtually a representative sampler not only of the range of people Close has chosen as subjects but also of the variety of methods he has explored or innovated to render the human face. Most of the glass, ceramic, or porcelain tiles were individually custom-glazed and cut by hand. The choice of material and the translation of each image in tile posed a methodological challenge specific to the source image, depending on how Close generated it.

For mosaics based on paintings created with overlaid colors and shapes such as the 2000 painting Emma, tiles were individually custom-glazed in colors as close to the discrete strokes in oil paint on the canvases. The tiles were then individually cut and pieced together by hand to replicate the shapes in the painting. Mosaics based on watercolor prints such as Zhang Huan/Mosaic required adopting Close’s process of overlaying coats of color in glaze. Based on multiples made with felt hand stamps, Cecily/Mosaic and Kara/Mosaic required sourcing thousands of glass chips in different colors that were mechanically tumbled in different batches to keep the colors separate, each batch taking around 12 hours. The tumbled glass chips were then pieced together to approximate the nesting disks of oil paint in the felt hand stamp multiples.

Mosaics based directly on photographs posed the challenge of striking a balance between translating the seamless realism of the photographic image and the tactile quality of mosaic tiles. This was achieved with micromosaics assembled using stained glass chips or hand-glazed ceramic tiles individually cut by hand in minuscule shapes. For example, the fine mesh of tiles creates a shimmering effect and the diagonal orientation of the grid produces dimensionality in Pozsi/Mosaic and Sienna/Mosaic. In his December 19, 2016, review of the subway portraits for The New York Times, Randy Kennedy noted that the slivers of stained glass representing the artist's facial hair in Self-Portrait (Yellow Raincoat)/Mosaic "are alone worth missing a train to inspect at close range." 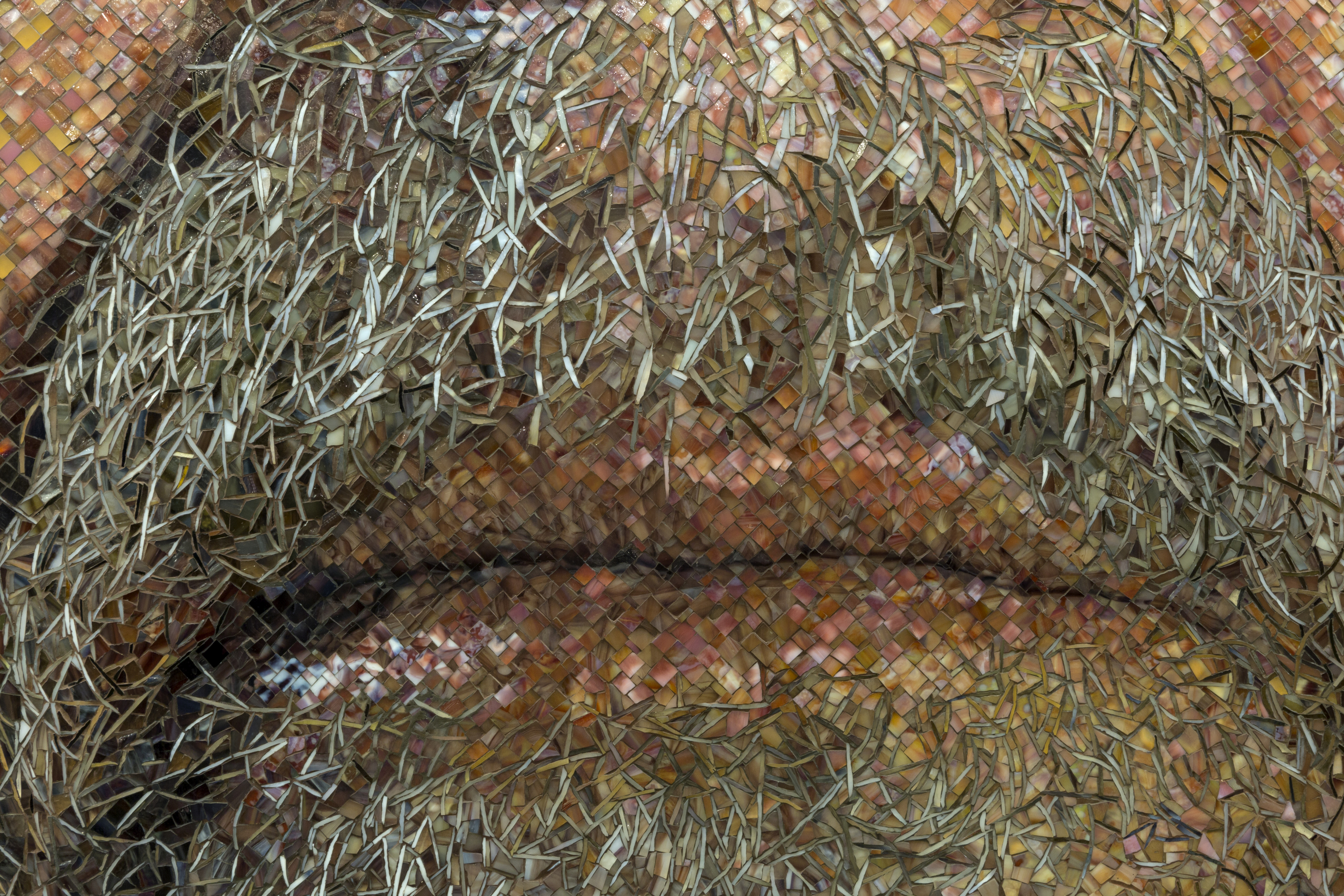 For Alex/Mosaic, which was based on a grisaille reduction block print that also appears to be continuous-tone from afar, some tiles were hand-glazed with texture both to translate the fine detail of sinuous lines, dots, or hatches in the print, and to simulate the metallic feel of the print. These cited methods were all developed and executed by Mosaika Art and Design.

Besides both being portraits of musicians whose creative life stories are inextricable from the fabric of New York City, Lou/Mosaic and Phil/Mosaic were created after eight years of refining an experiment using a UV-cured acrylic printer at Magnolia Editions. Reversing the traditional masking strategy, the tiles were hand-glazed in 19 layers, each corresponding to a value in a spectrum from white to black. For each layer, magenta acrylic ink was applied using the printer over image areas to seal the image, washed to remove the glaze in non-image and unsealed areas, and then fired to burn off the acrylic mask. The layers of unwashed then fired glaze cumulatively built the image in topographic relief. [A time-lapse video of the process can be viewed in the Notes section of Phil/Mosaic.]

Close identified the collaborative relationship with the fabricators as the most exciting aspect of the project with the process of seeing his ideas interpreted by others. Of the mosaics, he noted, “[Commuters] can run their fingers on the wall. The physicality is in many ways what it’s all about.”