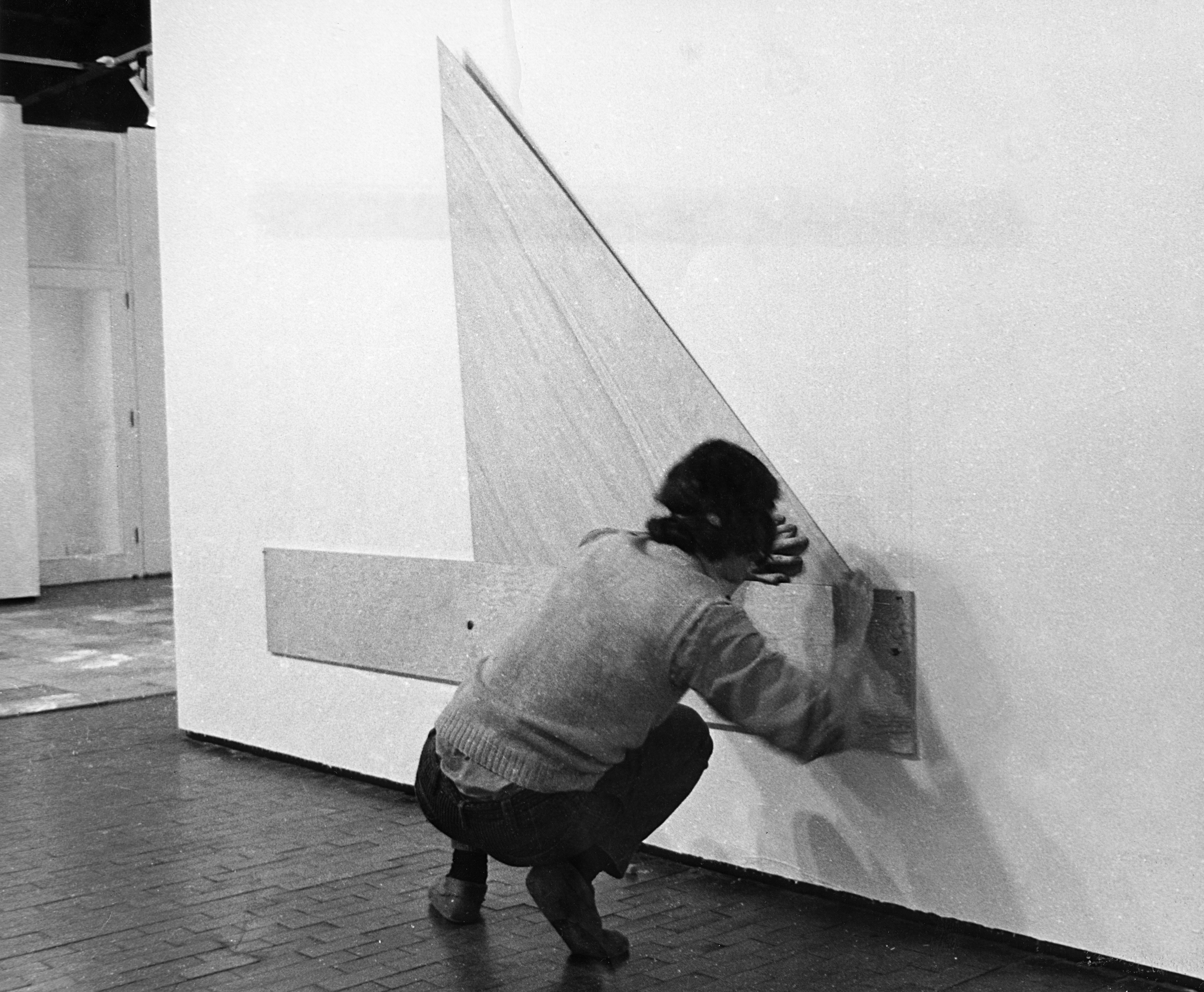 On April 6, 2021, the Sol LeWitt Wall Drawings Catalogue Raisonné expanded by one artwork. The new work is Wall Drawing #5A, the first and only artwork to be added to the catalogue since its initial publication in August 2018, though existing entries have been continuously updated during that time. The publication of this artwork caps off years of research and is only possible now that the catalogue raisonné research team—led by myself and Editor Lindsay Aveilhé—has confirmed enough information to present the new work to the LeWitt Estate for its approval to include the work in the catalogue raisonné.

Wall Drawing #5A was first installed at Vancouver’s Douglas Gallery (later known as Ace Gallery) in November 1969 for an “American Group Show,” featuring artworks by Carl Andre, Ron Cooper, Sol LeWitt, Fred Sandback, and Keith Sonnier. The exhibition checklist, discovered by the archivist at Ace Gallery in 2017 in response to an information request, details minimal information about the LeWitt work: just the inclusion of an unnamed “Wall Drawing,” and its dimensions, 8 feet by 12 feet. For almost a year, this was all we knew of the work; no photo of the installation had yet been located. 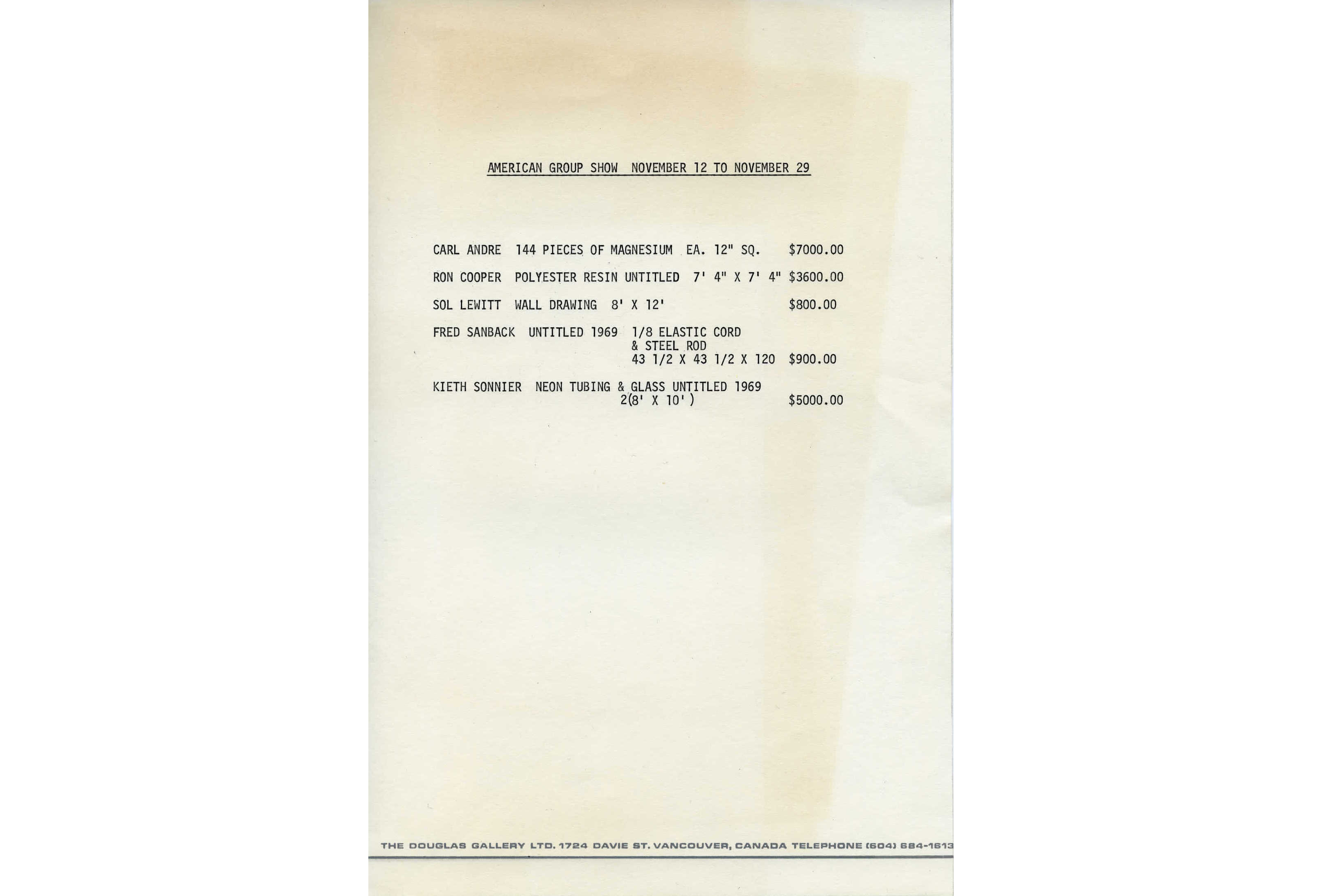 Despite a thorough review, the wall drawing installed at Douglas Gallery did not appear in any of LeWitt’s early public recordings of wall drawings (such as his 1972 article “All Wall Drawings,” intended to be a complete accounting of the works up to that point), nor in any of his private lists of works or notebooks from 1969. We requested from Ace Gallery any other information regarding the exhibition, and several newspaper reviews of the show were located in the gallery archives. These were important for several reasons. First, they proved that the work was in fact installed; second, they described the work’s content (the final result of LeWitt’s exact instructions, which are lost): two adjacent squares, the left square consisting of vertical and diagonal right pencil lines, the right square consisting of vertical and diagonal left pencil lines; third, they confirmed that the drafter of the work was artist Glenn Lewis. However, those same newspaper accounts introduced some confusion about the piece, with one review listing its size as 4 feet by 8 feet, rather than the 8 feet by 12 feet of the checklist.

Among the many useful documents in the archives of the LeWitt Studio are boxes of unmarked, unsorted photographs taken over the years, some of which were used as unlabeled photos in LeWitt’s first catalogue raisonné, published in book form in 1984. Over the many years of research into the current publication, the Artifex Press catalogue raisonné research team went through this archive of photographs a number of times to check for photos of works and flag images that did not seem to match installations of known wall drawings, as well as to look for images of installations where no images were extant. Upon another review of this box of photographs in 2018, we discovered an in-progress photograph, previously thought to perhaps be a photo of a different installation at Ace Gallery, that seemed to match the newly located description of the wall drawing at the Douglas Gallery. The inclusion of a part of a Carl Andre floor work that matched the one from the Douglas Gallery checklist seemed further evidence that this might be a match.

With this information already discovered, we decided it would be helpful to contact Glenn Lewis. In a 2018 interview via email, he was able to confirm that he installed a wall drawing at Douglas Gallery but could not be any more specific about either the content or size of the wall drawing (not surprising, considering nearly five decades had passed). For the moment, we were stuck. Luckily, in 2020, after several years of attempted outreach, Douglas Chrismas (former owner of Ace Gallery) provided additional information in a telephone interview, confirming the content of the work and that the photograph in question was indeed of that installation at his gallery; as well as reconfirming the identity of the drafter. Chrismas was also able to explain the differing dimensions listed in the newspaper review and checklist, noting that the walls of the gallery were 12 feet tall, which would mean that an 8 foot wide drawing, featuring two adjacent squares each 4 feet in length, would take up an area of 8 x 12 feet on the wall, even while the drawn section was only 8 x 4 feet. (There are numerous examples of discrepancies in the measurements of wall drawings, as it is not always clear what is to be measured—part of the reason that LeWitt eventually removed dimensions from the standard caption used to record these works.)

Aveilhé and I presented all of this information in late 2020 to the LeWitt Estate, led by Sol’s daughter Sofia LeWitt, with Anthony Sansotta, Artistic Director of the Estate of Sol LeWitt, and John Hogan, Mary Jo and Ted Shen Installations Director and Archivist for Sol LeWitt Wall Drawings, Yale University Art Gallery—both longtime LeWitt drafters. We collectively agreed that the work now had the information necessary for publication—that is, evidence that the work was in fact installed, the date and site of the first installation, the identity of the first drafter(s), and proof of the content of the work (in this case, visual proof in the form of a photograph). What the wall drawing lacked, however, was a “title,” or set of instructions, and a wall drawing number (LeWitt only began officially numbering his wall drawings in the 1980s).

In the course of researching the catalogue raisonné of LeWitt’s wall drawings, we have been able to confirm 32 additional artworks that went unrecorded in LeWitt’s previous catalogues raisonnés or by his studio in their official recordkeeping–this new work is the 33rd. For each newly discovered work, we have assigned a number and letter based on the previously installed work they are most closely related to. (For example, Wall Drawing #16A is a newly discovered work that is distinct, but related to Wall Drawing #16, which was recorded in LeWitt’s 1984 print catalogue raisonné.) Similarly, for each newly discovered wall drawing, we synthesized the written instructions (when available), phrasing and wording from LeWitt’s language used in existing works, and other documentation to create a title that accurately conveyed the content of the work, taking into account LeWitt’s continual revision of the titles of existing wall drawings throughout his career (meaning that a title LeWitt created in, say, 1969, would have been revised by the artist in his 1984 catalogue raisonné, when he standardized many uses of specific language).

Because the newly discovered work at Douglas Gallery is such an early wall drawing (It is chronologically the 27th wall drawing ever installed), both the number and title assigned to the work posed numerous difficulties. Similarly, because we did not have the exact instructions for the work, there were fewer existing works to base the wording of the instructions on. But after a careful review, the work was assigned the title Wall Drawing #5A Two adjacent squares, each with a two-part combination of lines superimposed. 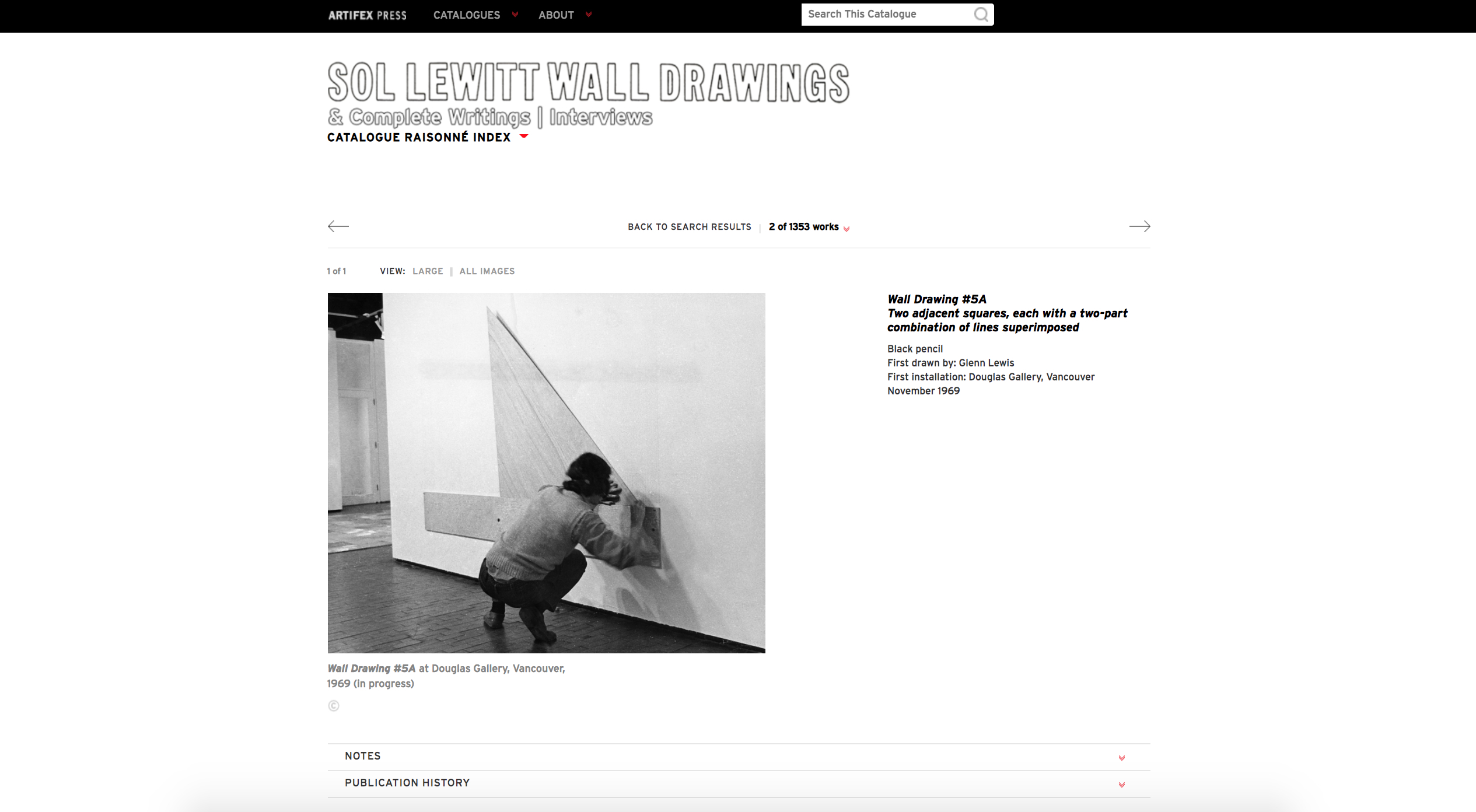 This “new” Wall Drawing is part of a small group of LeWitt works known to have been installed but lacking sufficient documentation for the works to be reinstalled, and which were therefore not included in the catalogue raisonné at the time of its initial publication. Some two and half years later, the first of these once insufficiently documented wall drawings has now entered the catalogue raisonné. These unconfirmed works face a variety of research challenges. In many cases, because LeWitt transmitted the instructions for works verbally, there exists no plan or written record of the installation; in others, no photos have been found of the installation, so there is no proof that the work was in fact ever installed—a requirement for a work of this type to be included in the Catalogue Raisonné. As LeWitt himself wrote, “the plan exists as an idea but needs to be put into its optimum form. Ideas of wall drawings alone are contradictions of the idea of wall drawings.” There exist many cases during LeWitt’s lifetime where he created proposals for Wall Drawings that went unrealized; those works live only in that form, but not as wall drawings. They will never be included as entries in the catalogue raisonné. (An exception exists for LeWitt’s final wall drawings, which were in planning at the time of his death and of which he specifically expressed his desire that they be realized posthumously.) But we continue to research the projects that did come to fruition, and should sufficient information surface for others, they too will one day be added to the catalogue raisonné. It is truly a living document, just as LeWitt’s wall drawing practice lives on through the continuous adaptation and installation of his works at new sites all over the world.