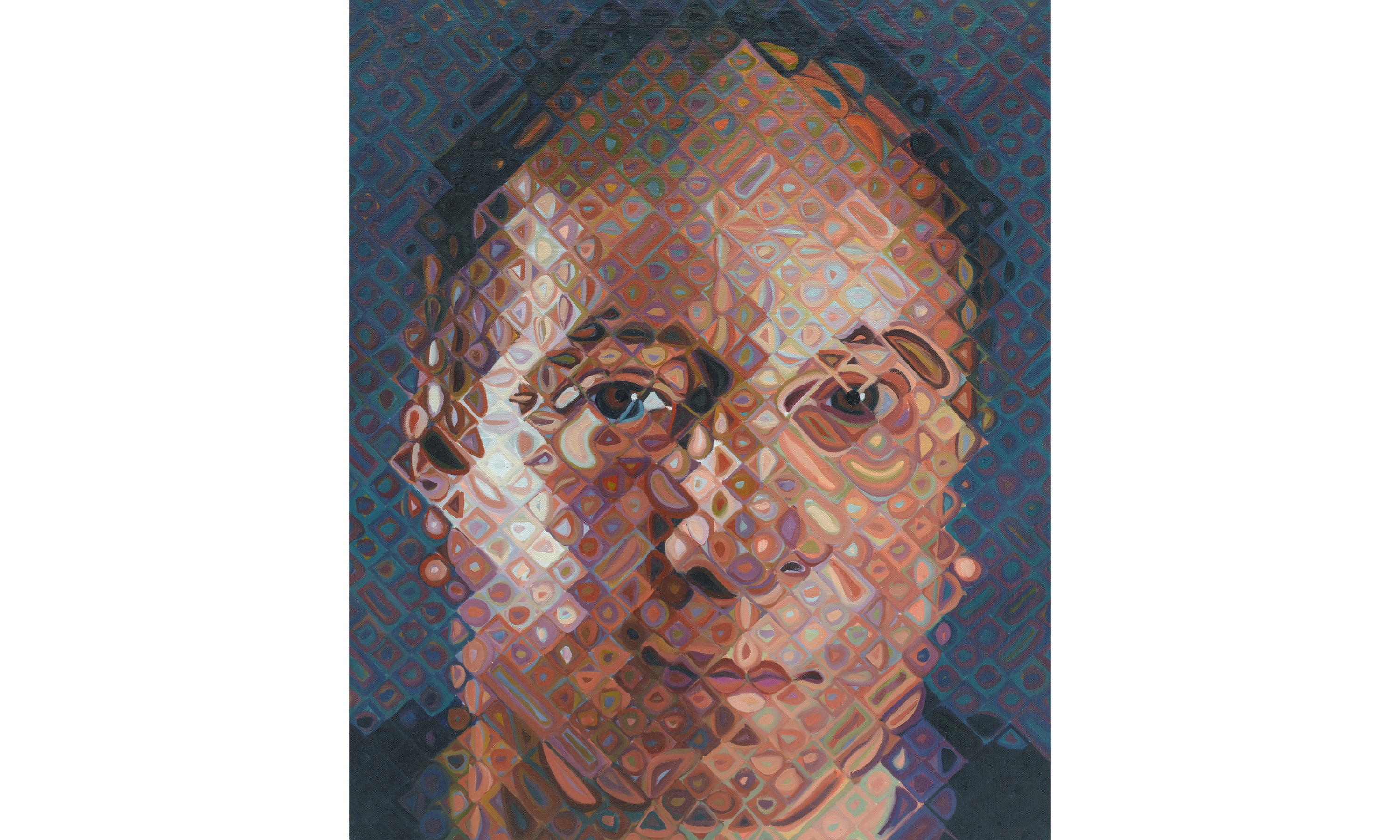 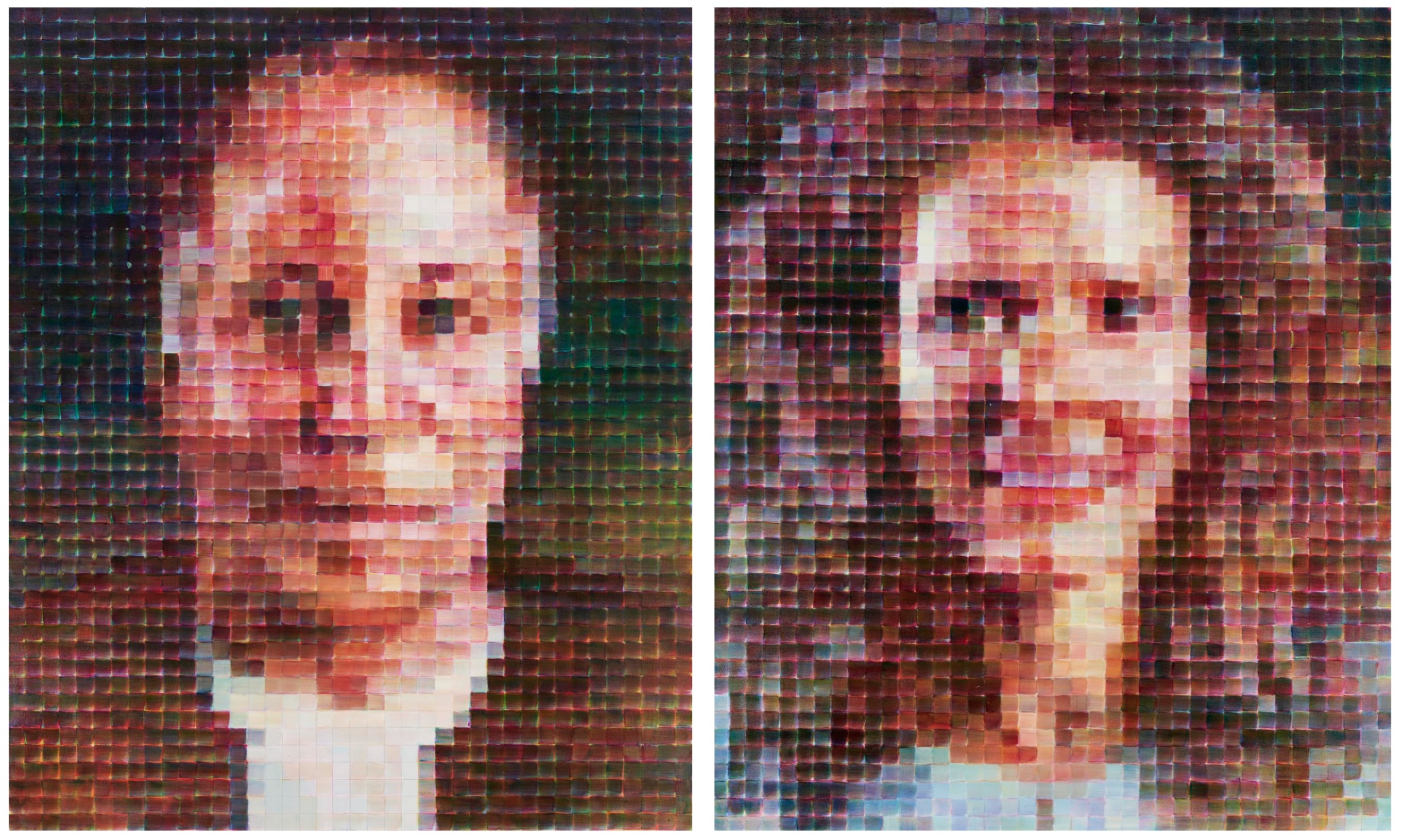 The Chuck Close Catalogue Raisonné, edited by Carina Evangelista, has been updated with new paintings from 2019-2020, including portraits of Paul Simon and Edie Brickell. While Close is probably best known for his portraits of artists, including many self-portraits, musicians have also been important subjects, and the artist in turn has been a source of inspiration to his fellow creatives. 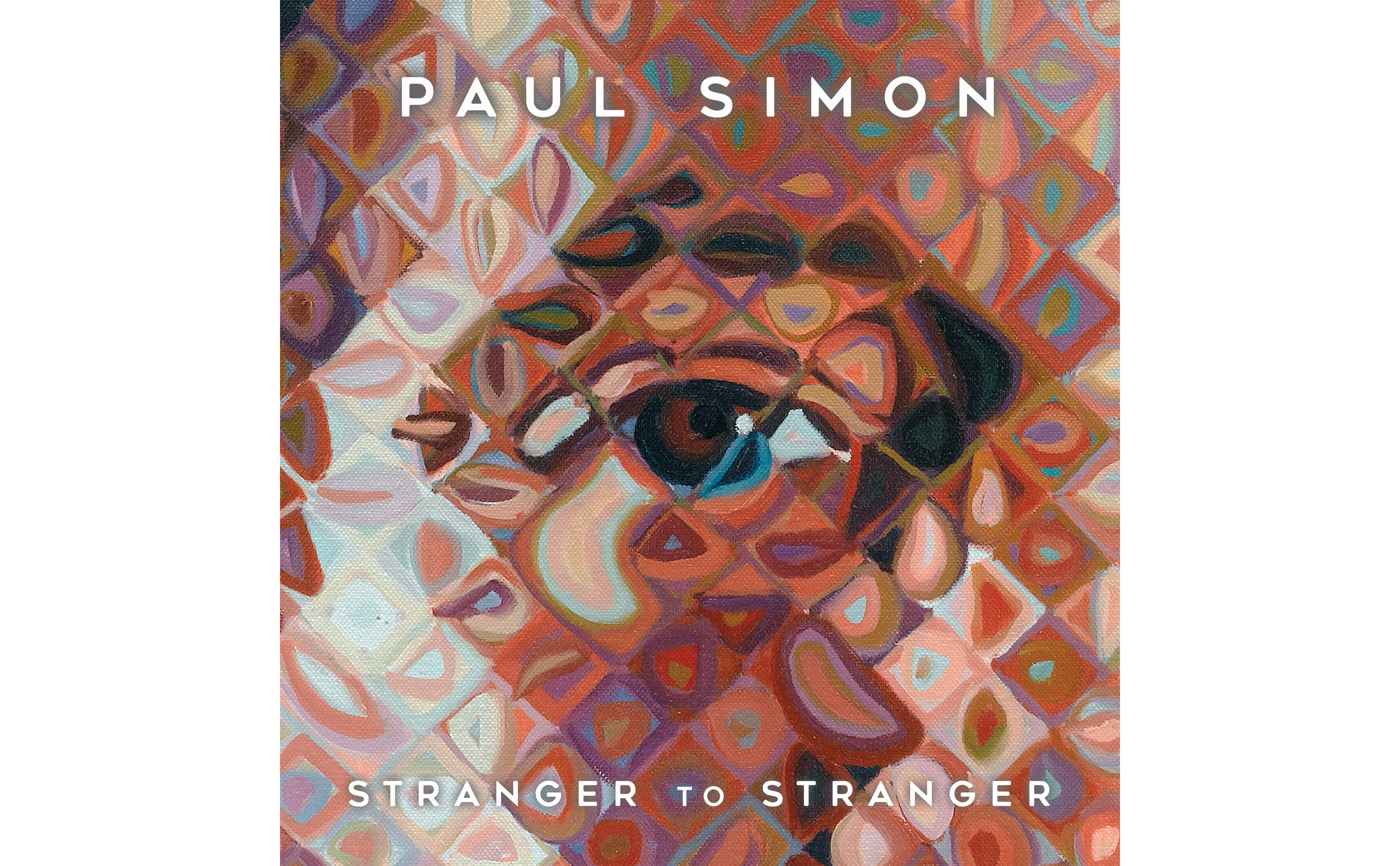 Paul Simon is also the subject of an earlier painting from 2011. As a testament to their friendship, Simon dedicated his thirteenth solo studio album, Stranger to Stranger, to Close. The album cover features a detail of the 2011 portrait, with a full illustration of the painting on the album sleeve. Of Simon, Close writes, “if the experiences of people like me, who grew up in the 40s, 50s, and 60s, had been the subject of a movie, Paul Simon would have written the soundtrack of our lives.” 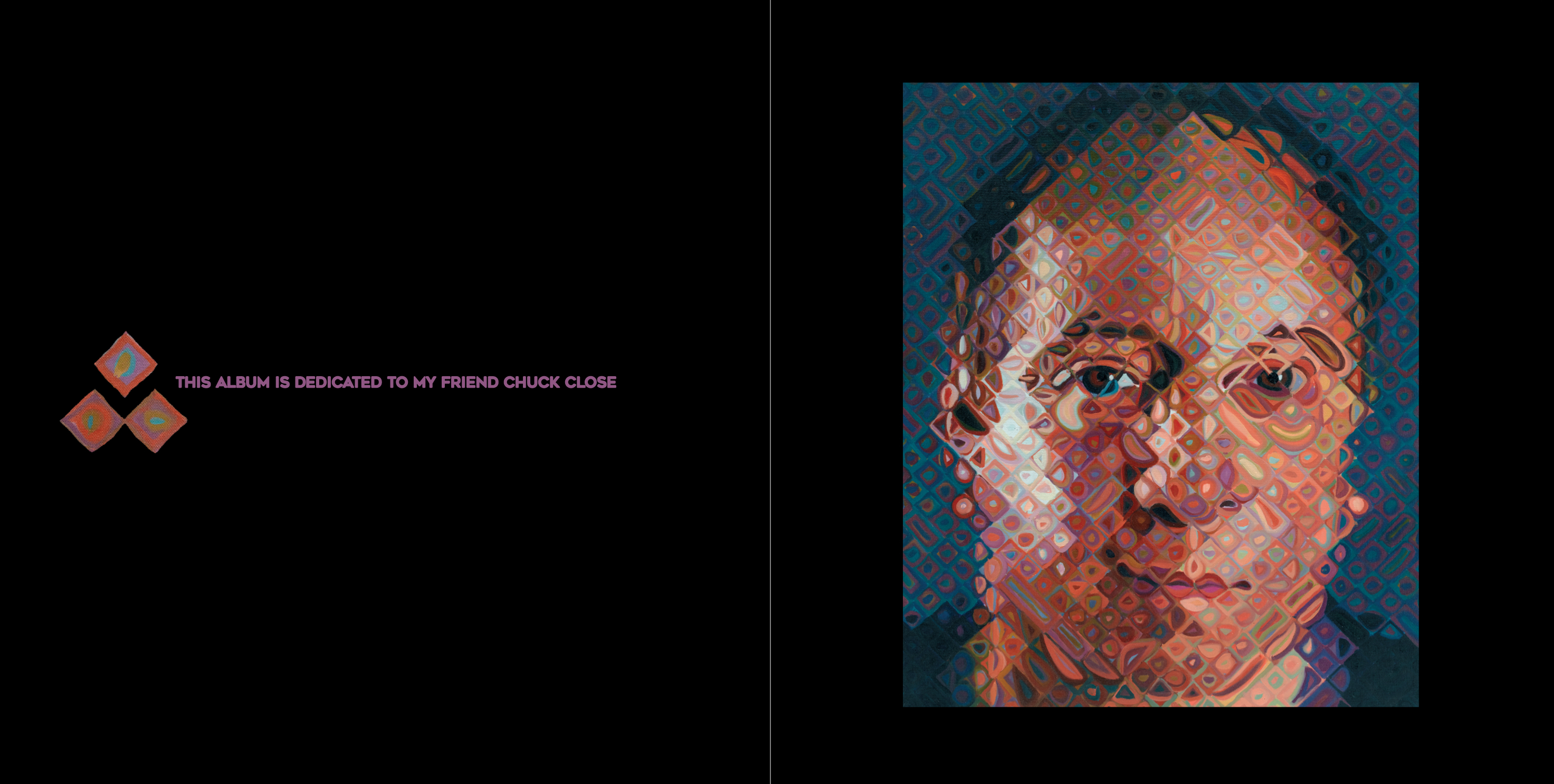 Upon the release of this album in 2016, Simon was rumored to have hinted at retiring but later clarified that he was simply considering slowing his touring schedule. Close recounts that he called Simon at the time to tell him, “‘Artists don’t retire,’ ….I think I talked him out of it. I said: ‘Don’t deny yourself this late stage, because the late stage can be very interesting.’” Citing the revelations of late-career work by artists like Willem de Kooning and Pablo Picasso, Close also reminded Simon that Henri Matisse did not stop making art even when he could no longer continue painting in his winter years, “Had Matisse not done the cutouts, we would not know who he was.” 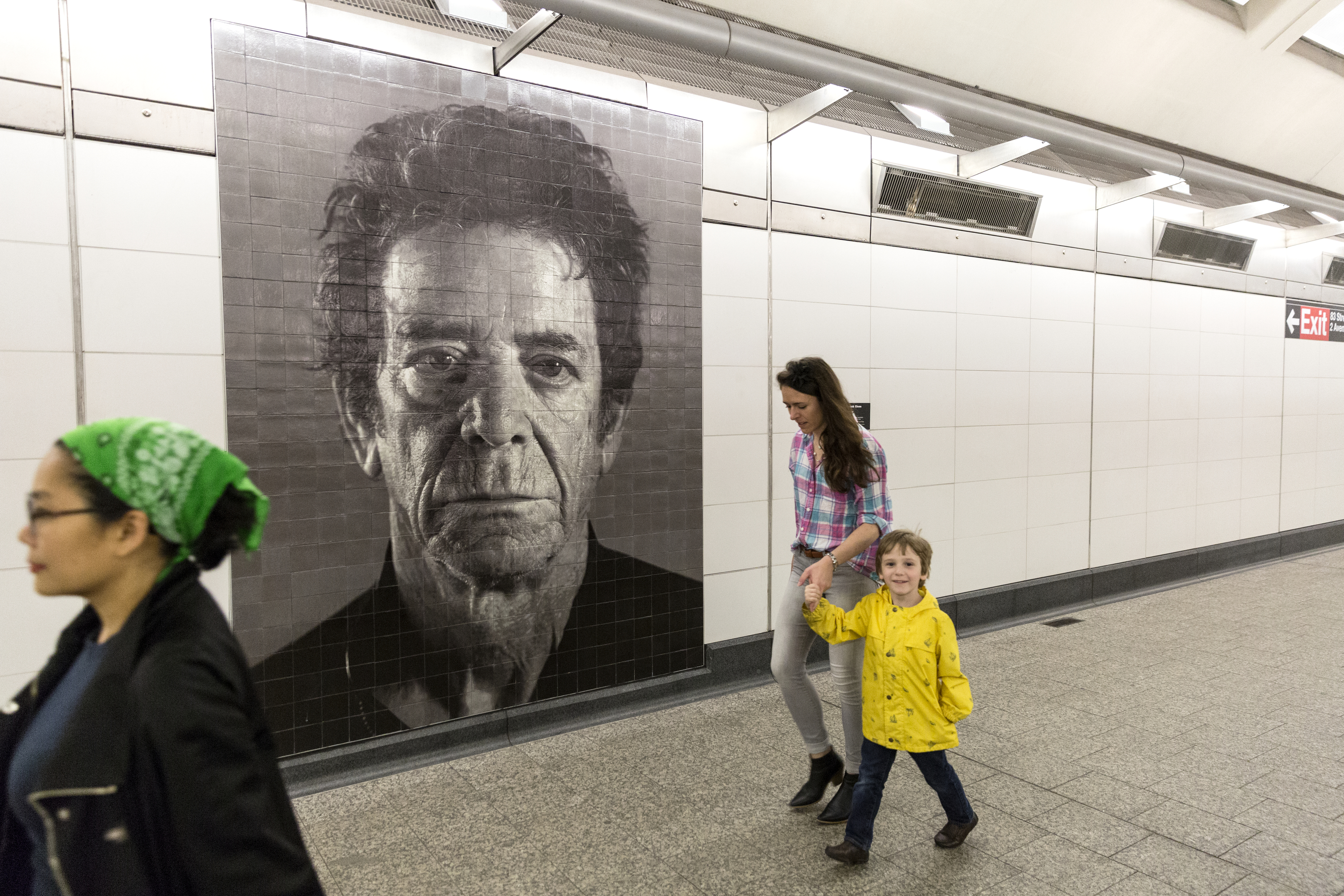 If Simon wrote the soundtrack of Close’s generation, perhaps Lou Reed wrote the soundtrack of New York City of his era. And so aptly, beneath the streets of his beloved city, his portrait is permanently installed in the Second Ave-86th St station as part of Close’s “Subway Portraits” (2017). Commissioned by New York State Metropolitan Transportation Authority Arts and Design and fabricated by Magnolia Editions, the mosaic is based on a black-and-white Polaroid taken by Close in 2012. Although Reed died before the mosaic was installed, he was able to view the tapestry Close produced in an edition based on the same photograph when Reed attended the opening of Close’s solo exhibition at Guild Hall in 2013. 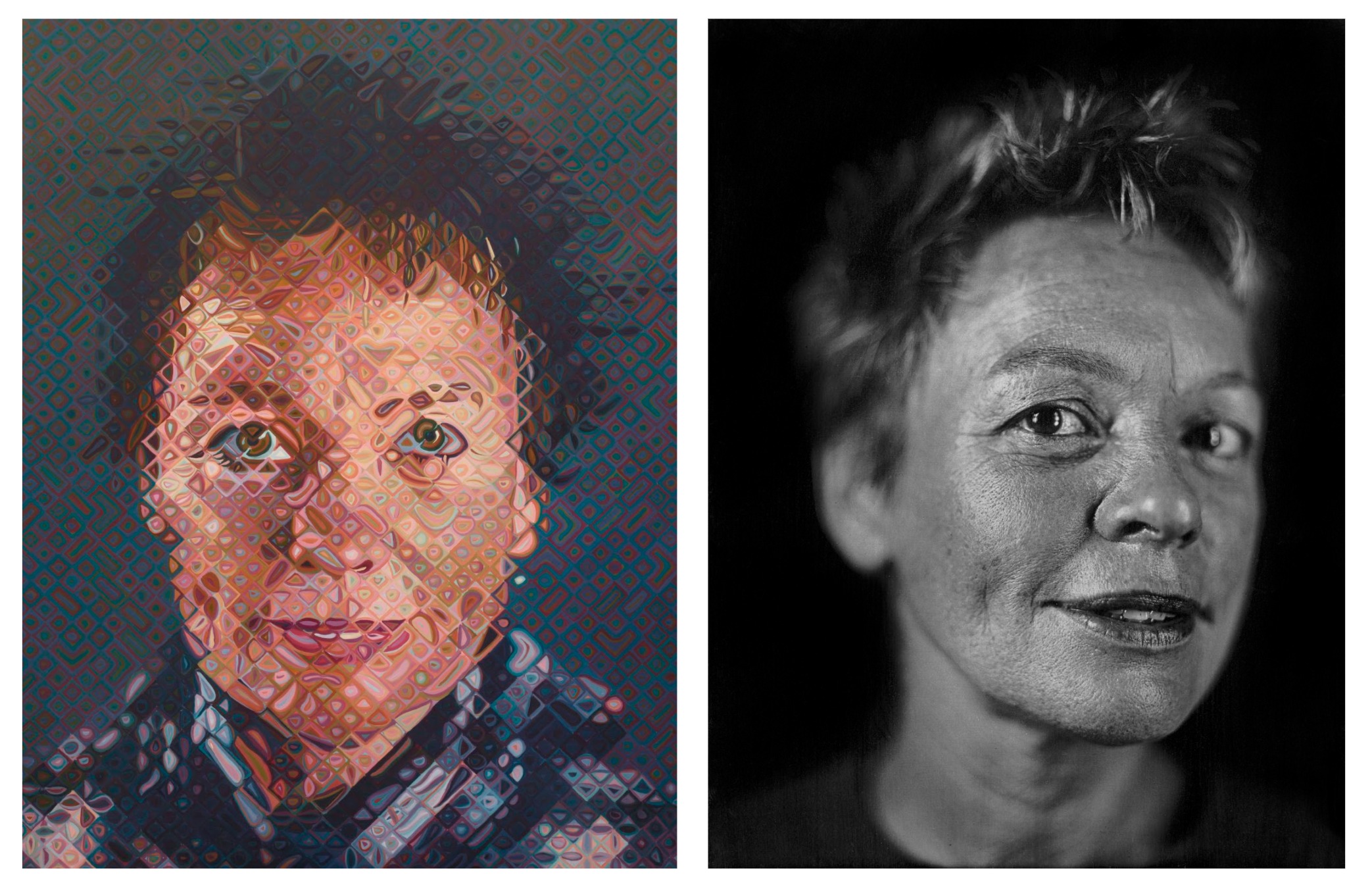 Reed’s widow, the artist and musician Laurie Anderson, has also been the subject of Close’s portraits. A daguerreotype from 2000 was part of a collaboration with the poet Bob Holman that produced a book and exhibition. Holman’s poem about Anderson reads, both on the page and out loud, with a syncopation similar to Anderson’s own music. 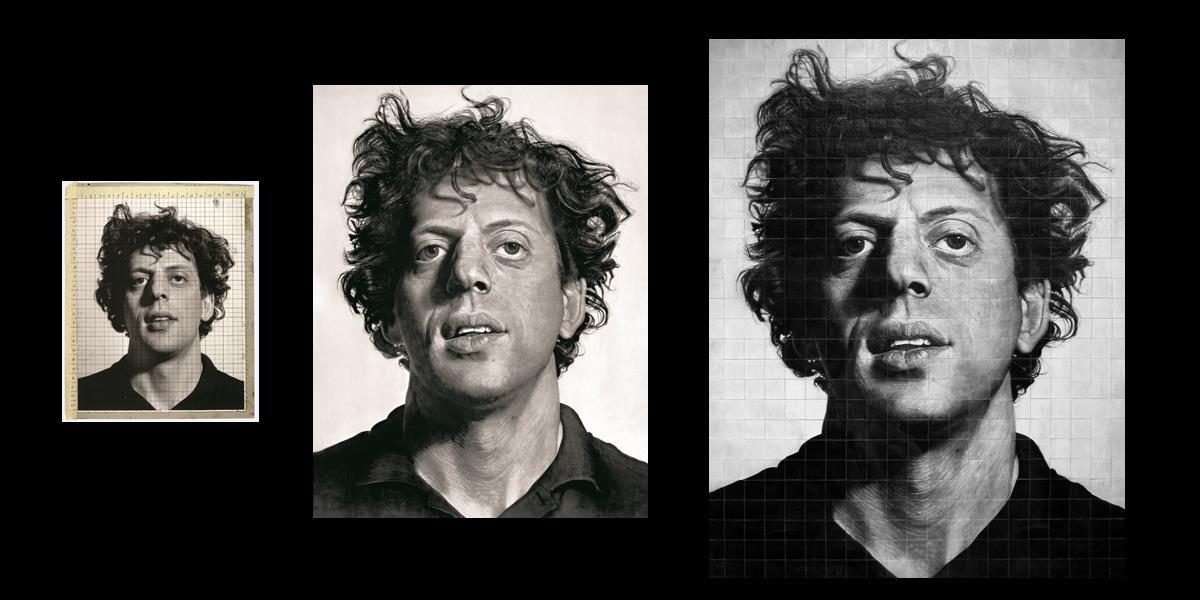 Perhaps the most iconic portrait of a musician that Close has produced is of Philip Glass. In particular, Close has generated scores of iterations of the photograph that he took of Glass in 1968, much like how a musician plays their songs on stage again and again, with each performance taking on a different form. Based on this photograph of Glass are paintings, tapestries, daguerreotypes, and mosaics, most of which are already published in the first volume of the catalogue raisonné, as well as drawings, which will be included in the forthcoming Unique Works on Paper volume.

In return, Glass composed “A Musical Portrait of Chuck Close” (2005), a solo piano piece comprising two movements. Choreographed by Jorma Elo, the ballet set to Glass’s composition premiered in New York at the American Ballet Theatre in 2007. Above is a recording of a performance of the piece by the Boston Ballet in 2014. Close’s self-portraits are displayed as the backdrop, as Bruce Levingston, who commissioned the piece after seeing one of Close’s portraits of Glass, plays the piano on stage. 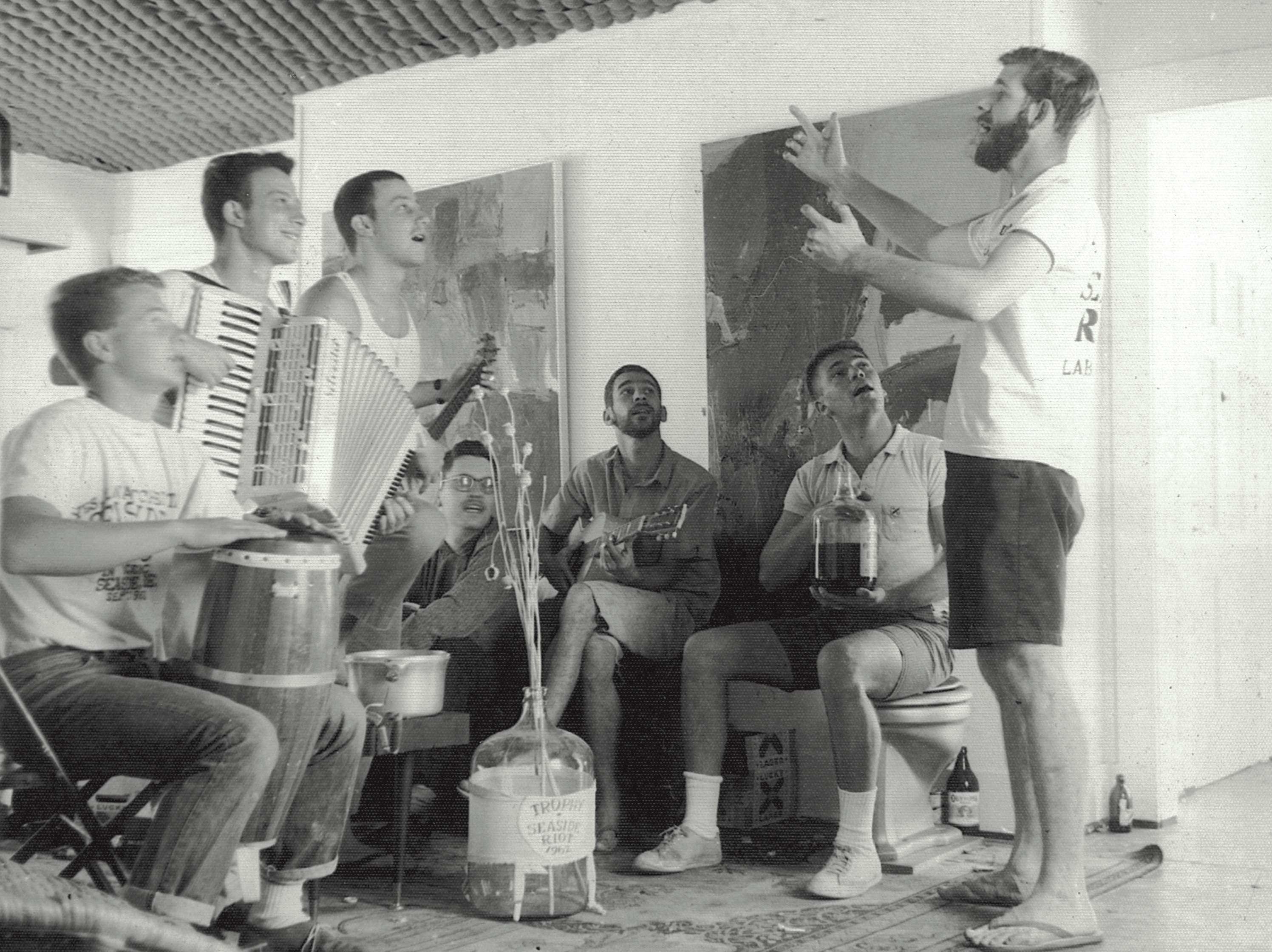 Chuck Close (right) conducts a band of his housemates in the large, dilapidated frame house that they rented near the University of Washington, Seattle, ca. 1962
Photo courtesy Chuck Close Studio


Close’s relationship to music dates back as early as his college years, as can be seen by this snapshot above. It is no surprise that Close has regarded his own work and process through musical analogies, as he told the curator Martin Friedman around 2005: "I've made enough of [my paintings] to know how they will read from a distance. I don't have to back up and look at them. The analogy might be to a composer scoring a composition for a number of musical instruments. He knows what the bassoon, the oboe, or whatever will sound like when they are played together.” Close added: “I guess what I'm making are color chords of a kind. I assign qualities to certain marks by giving them colors. When they're played together—or seen together—the color chord melts in the mind (as they used to say about 'acid'). They come together to make some kind of color world."

Just as Close’s modular marks meld in the eyes to produce vibrant portraits of the musicians with whom he has had decades-long friendships, Close and those same friends have come together in a rich back-and-forth of artistic inspiration across the mediums of sound and color.
All artworks © Chuck Close