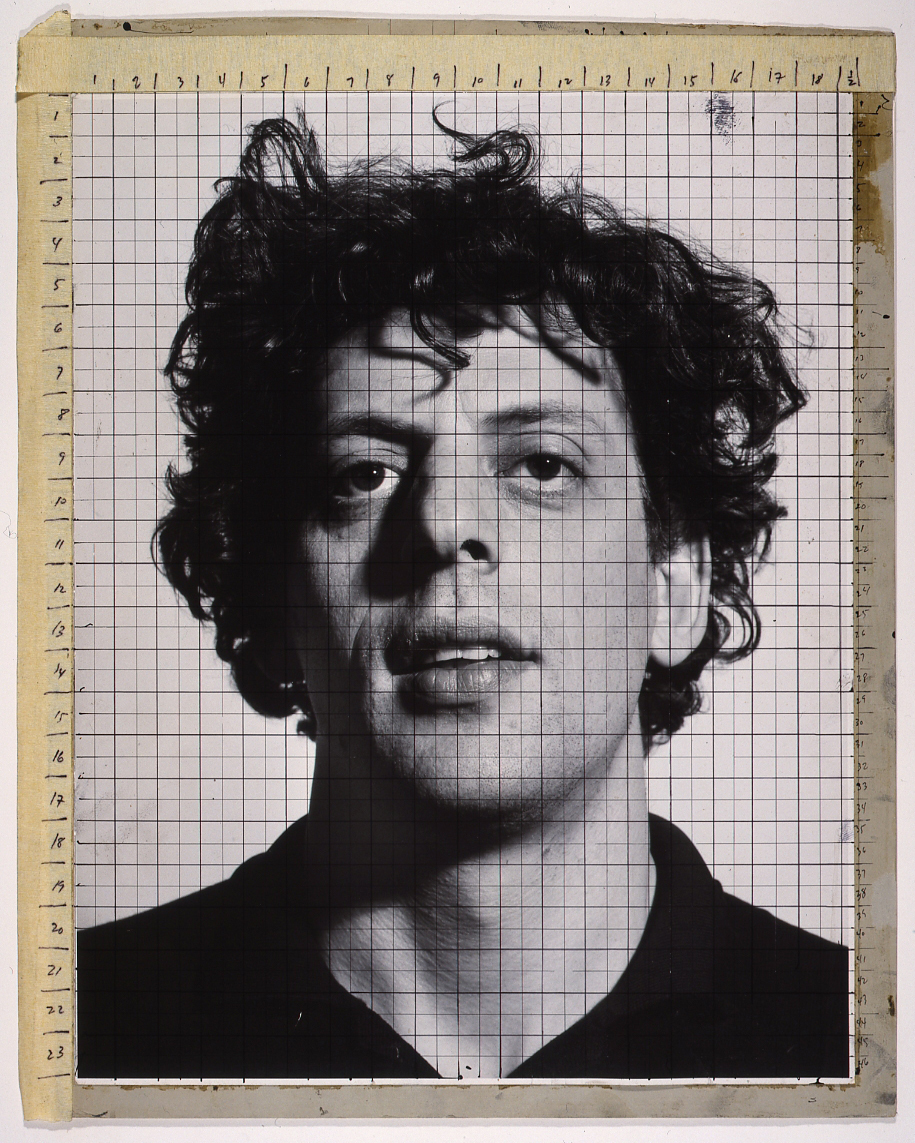 Artifex Press is pleased to announce the forthcoming publication Chuck Close: Photo Maquettes, a new volume in the artist’s catalogue raisonné. Photography is central to the artist’s practice, and this new volume will document the gridded photographs from which Close has created works in other mediums, including paintings, drawings, prints, and tapestries.

Close has likened his photography to “a well to which you can return again and again and each time get a bucket full of different stuff from it.”(1) For example, his 1969 photograph of Philip Glass has generated dozens of works, including the monumental and iconic grisaille painting at the Whitney Museum of American Art; fingerprint drawings of various sizes and formats (including one on paper watermarked with flowers); works in wet paper pulp, watercolor, and rubber stamp ink; houndstooth-patterned drawings; silk tapestry; and even an anamorphic print in which the image resolves as a reflection on a steel cylinder. Glass has fittingly stated that his face was to Close what haystacks were to Monet.(2)

Curator Madeleine Grynsztejn has described Close’s process as “the meeting of the frozen instant of the snapshot with the long, unhurried duration of a hand distributing paint over a surface.”(3) If his entire oeuvre is the mediation of gridded photographs, each maquette bears the marks of the meditative process of looking at a photograph and translating its information onto canvas, paper, or textile. Close has explained, “If I am looking for a certain thing in the photograph, then I make one kind of work, and if I deal with some formal aspect of it or make a different choice of material and technique, I will find entirely different elements embedded in the photograph.”(4)

Each maquette also bears evidence of the artist’s use of the grid — which he has referred to as a visual metronome whose orientation and size arbitrate the final work’s ocular rhythm. How tight or loose is the grid in relation to the scale of the canvas? Will an iris be boxed in or sliced through? Is the grid horizontal or diagonal? (The same nose in profile will be transformed by this choice.) “This is the great thing about the maquettes,” Close has said. “You see the decisions that I made, where those lines fall… That’s really what it is all about. And if someone were to take a lot of time analyzing them, I think they would find that there’s a method in the madness.”(5)

In preparation for the publication of the Photo Maquette volume, kindly contact Carina Evangelista, Editor of the Chuck Close Catalogue Raisonne, at cevangelista@artifexpress.com with information pertaining to the exhibition, publication, or ownership of any of the artist’s maquettes. Please note that Artifex Press maintains strict confidentiality of collector identity and contact information, and respects requests for privacy and anonymity.