How does one archive a phenomenon? Earlier in this series of blog entries, my colleague Christine Lee touched upon the difficulty of illustrating the phenomenological dimension of Lee Ufan’s work, and this remains an ongoing challenge as we research and catalogue the artist’s oeuvre. Of course, art historical conventions evolve, and strategies like indicating that a work’s dimensions are variable, using hyphenated or slashed dates for pieces that evolve or are iterated over time, and documenting performance with video have become some of the conventions for the cataloguing of more complicated artworks. Perhaps, we will soon be using AR- and VR-type simulations to document the difficult works to come. However, for this writing I want to focus on the basic discursive role played by an older mode of documentation—photography, particularly the work of ANZAÏ, who was one of the principal documentarians of Mono-ha, the Japan-based art movement of the late 60s to early 70s, through which Lee Ufan first came to prominence.

Shigeo Anzai, known as ANZAÏ, is a photographer and self-professed “art documentarist,” who, armed with a Leica, recorded a vast number of artworks, exhibitions, events, and so on from the late 60s onward in Japan and internationally. Some 3,000 of his photographs were the subject of a survey exhibition at the National Art Center in Tokyo in 2007. While I made the distinction between his identity as an art photographer and a documentarian of works by others to make legible the diverse oeuvre ranging from large-format portraits to more intimately scaled archival images of artworks, ultimately they are not so different. Even those images that are categorized as documents function performatively through the optic of a photographic artist, just as ANZAÏ’s more “creative” work results in objects that can enter institutions and the marketplace.

Some of ANZAÏ’s photographs demonstrate the belief in the medium’s mechanical nature, which is to say they speak to the objectivity of the record as seen in the photograph. Here, for example, is a fairly standardized eye-level image of a sculptural work on the floor: Lee Ufan’s Relatum (formerly System B), installed at Tamura Gallery, Tokyo, in 1970. 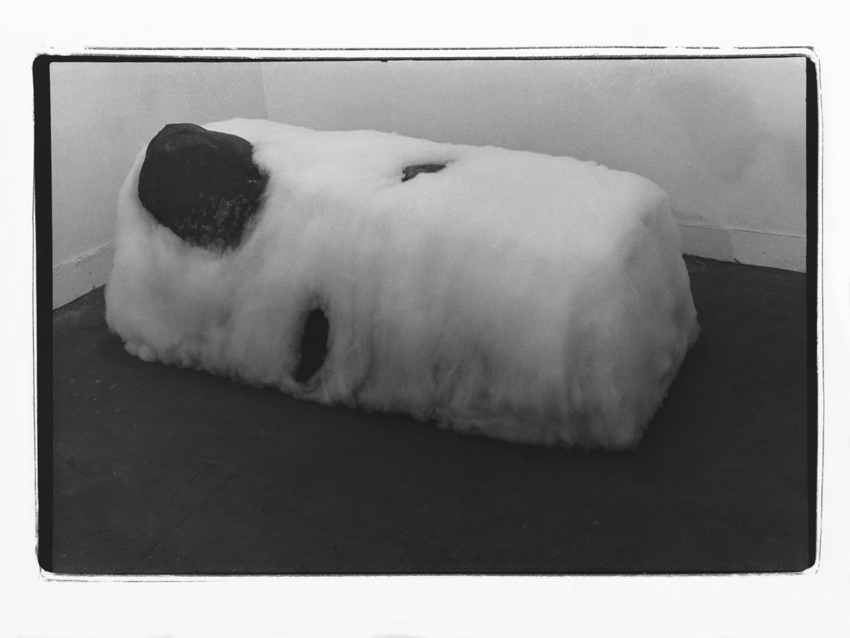 But this assumed objectivity dissolves fairly quickly when the artist enters the frame, as can be seen below, in an image of Lee Ufan installing another Relatum at the National Museum of Modern Art, Tokyo, also in 1970. ANZAÏ’s use of a tilted angle, a wide-angle lens, depth of field, black-and-white film, hand-written inscriptions, and the oversized negative easel signal his singular subjectivity as a photographer. Additionally, the image not only describes the artwork and its surroundings, but expands the artwork insofar as it renders the tension and contradiction between the work’s objecthood and its contingency. The photograph makes visible the process of the work’s formation in the specific environment at a specific time (while also suggesting the opposite process of the work’s de-formation, which will occur upon its de-installation). 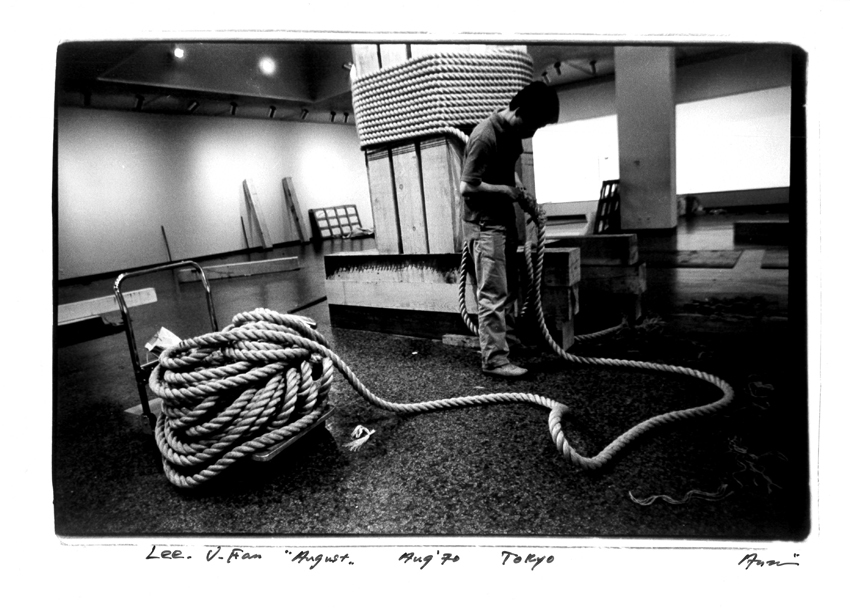 Even in documentary images without the artist present, similar techniques can be observed. 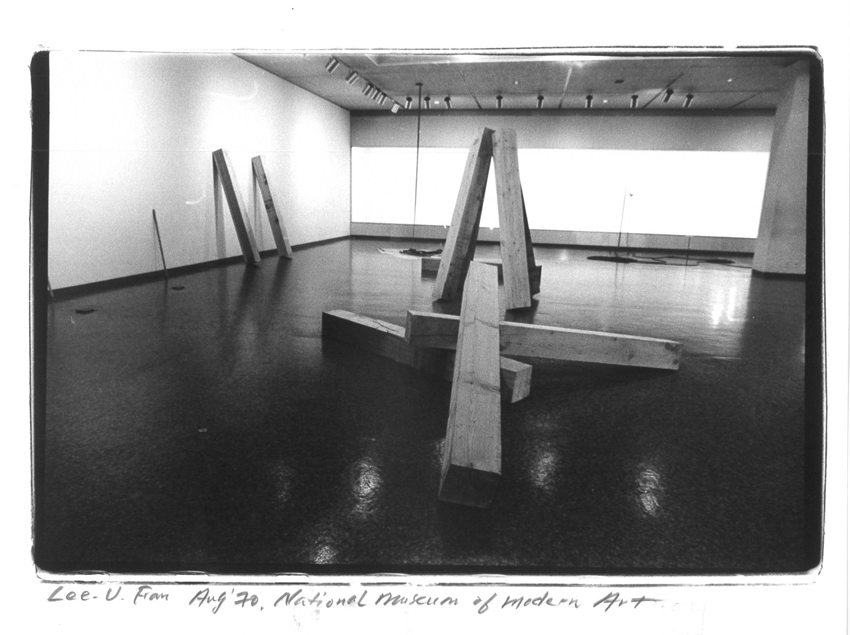 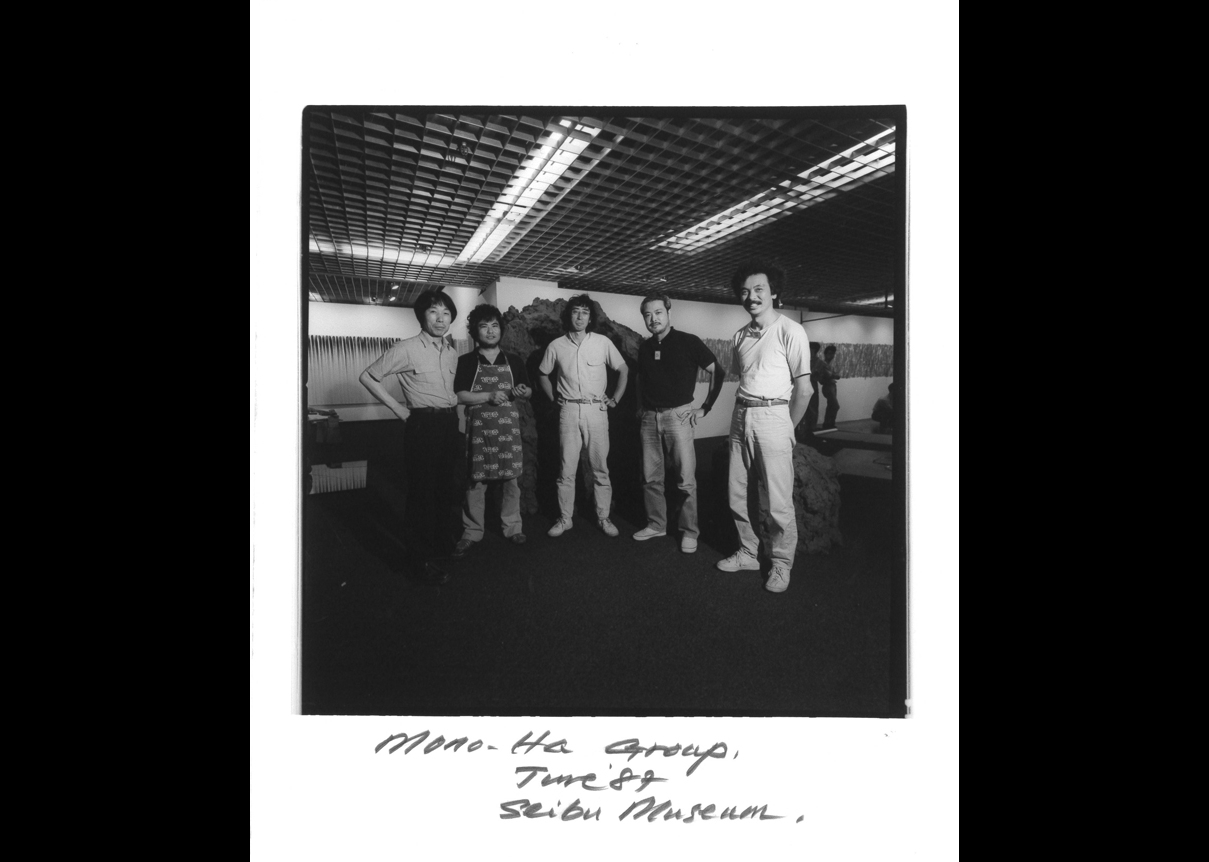 This photograph of five Mono-ha artists (Lee Ufan, Nobuo Sekine, Kishio Suga, Susumu Koshimizu, Katsuro Yoshida) is a straightforward group photo that presents a more nuanced reality upon closer examination. ANZAÏ might have wanted simply to describe the movement by depicting its protagonists, but it is his (and his contemporaries’) relentless gaze toward these artists that might actually have allowed for such discursive categories as Mono-ha and Post-Mono-ha to emerge in the first place. The performative symbiosis of the (temporary) sculptural work and the photographic work is such that they continuously valorize each other. From the vantage point of today, the ANZAÏ photographs reanimate the sculptures' significance—the very existence of a photographic record both describes and produces meaning (perhaps a spirit of the avant-garde). Just as the photograph relies on the existence of the sculpture, the sculpture relies on the photograph for proof of its sometime existence. Like Lee’s work, ANZAÏ's work is not entirely conclusive, containing multitudes and contradictions at its core. Looking at these images today, it makes me think that this archive of the past is somehow still alive, still speaking and still acting, much more than mere document.