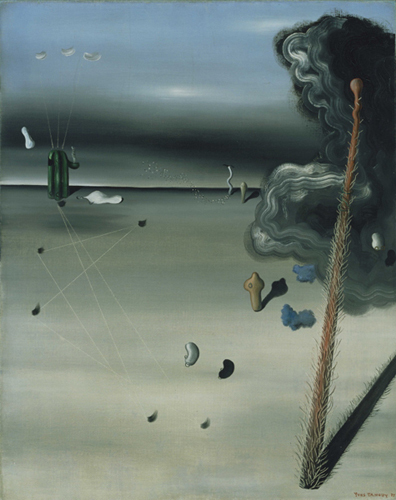 Artifex Press is pleased to announce that it has been named publisher of the forthcoming catalogue raisonné of the paintings, gouaches, and objects by Yves Tanguy, sponsored by the Pierre and Tana Matisse Foundation.

Self-taught as a visual artist, Yves Tanguy joined the newly formed surrealist revolution under the leadership of André Breton in 1926. Tanguy quickly developed a distinctive style envisioning vast, desolate, and otherworldly landscapes that became a touchstone for his fellow surrealists and for the rapidly expanding field of modern science fiction. When he immigrated to the United States in 1939 with the American painter Kay Sage, he re-united with his childhood friend, Pierre Matisse, now a leading New York art dealer. After Sage and Tanguy married, they settled in Connecticut, not far from their old friend, Alexander Calder, their works an inspiration to one another. In response to the war in Europe, Tanguy’s works of the 1940s and 1950s became ever more hallucinatory and disturbing.

After his early death in 1955, his widow devoted herself to the compilation of a complete catalogue of his paintings, gouaches, and objects. The catalogue was published by the Pierre Matisse Gallery shortly after Sage’s death. Owners of works not included in the 1963 catalogue immediately began to contact Pierre Matisse, who dedicated himself to publishing a supplement, but was unable to complete the project during his lifetime. His widow, Tana Matisse, established the Yves Tanguy Committee in 1999, inviting four specialists to fulfill his wish. With access to the Pierre Matisse Gallery archives and Kay Sage’s papers, the Committee has been able to review his oeuvre in detail to prepare a revised complete catalogue of his paintings, gouaches, and objects. Charles Stuckey, Head of Research, says, “Documenting Tanguy’s work completely for the first time, this publication will be an invaluable addition to the literature on surrealism and post-war American art.”

The final meeting of the Yves Tanguy Committee will take place September 25-28, 2017 at The Pierre and Tana Matisse Foundation offices in New York. Current and past owners of Tanguy’s works are encouraged to contact Charles Stuckey, Head of Research, at yvestanguycatalogue@artifexpress.com.

The results of this research will be published as a digital catalogue raisonné by Artifex Press, with an anticipated publication date of 2018.